A night out photographing northern lights in Yellowknife on September 25, 2016.

All our photo gear was prepared and packed –batteries charged, memory cards cleared, lenses cleaned, camera parkas… It was going to be a long night, and with expected temperatures close to 0 Celsius, warm clothes, hot tea and snacks were packed as well.

We arrived at Pontoon lake at 8:45pm. The sky wasn’t dark yet, but we could already see a faint band. A couple of handheld test shots to confirm it was auroras, and tripods and cameras were quickly setup, and focus done. The lights grew quickly and were beautifully reflected on the still lake. 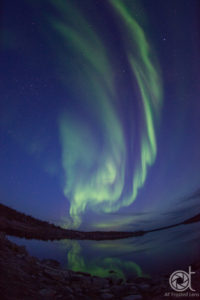 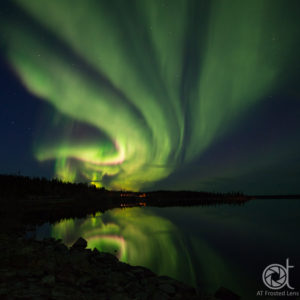 This beautiful display lasted for about half an hour, and died off by 9:50pm. Already happy with that first show, we pulled our chairs out, put camera parkas on our DSLRs and started waiting for more!

Pontoon lake is a well known spot for Aurora watching but we were by ourselves until 10:30pm. By that time, clouds had moved in and all we could see where green clouds once in a while. First cup of tea and snacks at 11:00pm.

Breaks in the clouds appeared around 11:30pm. The lights were bright enough to shine through and clouds created some interesting patterns. 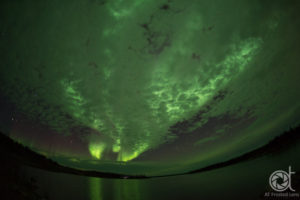 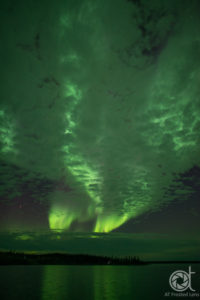 The wind had picked up and clouds were moving away. It was cooling down and with 90% humidity by the lake, we were monitoring the dew point. When the camera temperature got close to the dew point by a couple of degrees, we added chemical heat warmers in the camera parkas to avoid condensation on the lens.

Suddenly around 12:40am, the sky lit up and the lights were dancing! At one point could see pink running with our naked eyes. We took as many pictures as we could but sometimes, we just watched in awe. It lasted for what seemed like a very long time, about 1 hour. 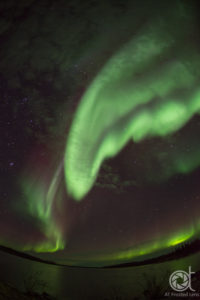 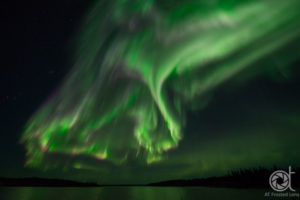 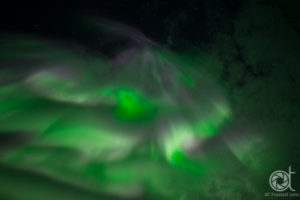 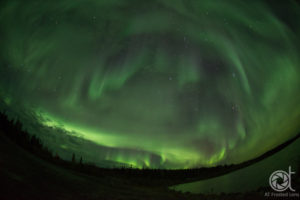 More clouds came in, more hot tea was poured, and frost appeared. A last display of lights and some high clouds came around 2:00am. 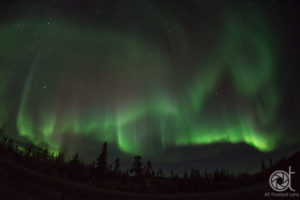 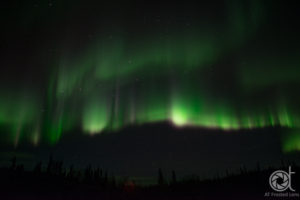 Happy and tired, we headed back to town and got to bed by 4:00am.

That is the tough life of Aurora chasers!