Camera Parkas are designed for outdoor photographers looking at protecting DSLRs and lenses from wind, humidity, frost or cold, and saving battery life.

Specifically designed for use with a tripod, the camera parka is ideal for landscape photography such as long exposures, timelapses, night and astro photography. Whether the dew point is an issue, or in foggy or cold weather, the Camera Parka protects camera equipment and saves battery life.

Main features of the Camera Parka 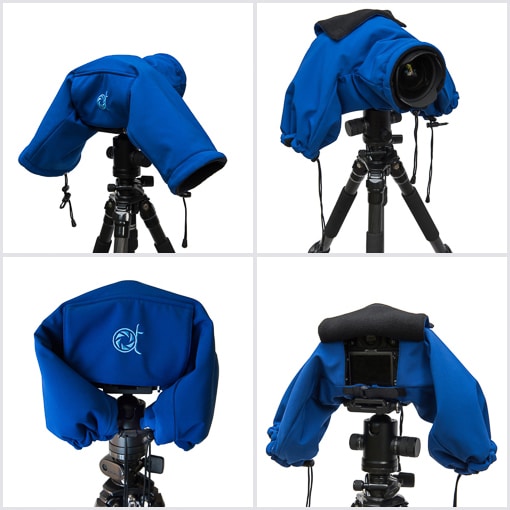 Front Sleeve tightened around the lens

Secure side sleeves with the snap hook

String to close up side sleeve

Both covers are made of high quality outdoor fabrics from Polartec®. The outer shell is water repellent, durable and blocks wind at 99%. It provides complete protection from wind, moisture and frost. The inner layer is a double fleece providing insulation from cold to the camera and warmth to the hands of the photographer when changing settings.
The Camera Parka Pro has an extra layer of thermal fabric around the camera body. It helps keep the cold out and the heat in, when using chemical heat warmers for instance.

Both covers have a version for short lenses or fish eye lenses. Extra pull strings inside the covers are used to secure the front sleeve around short lenses.

Which Camera Parka is best for you? Use the comparison table below summarizing specifications of the 4 versions available. 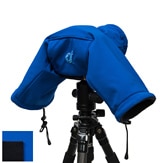 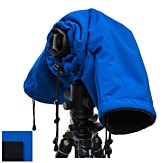 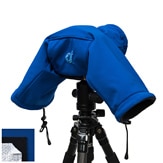 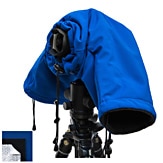 It provides insulation against cold, wind and moisture. It helps keep the cable flexible in cold temperatures, preventing the plastic to harden and crack.

During times when frost can form on equipment, the Camera Parka can help protect against frost forming on the camera body and lens.

Features of the Camera Parka:

Tests were performed one last time on the latest prototype before starting production. Results showed improved battery life, protection from wind, complete protection against frost and moisture, as well as protection from extreme cold affecting the shutter.

For all tests, we used Nikon D800 cameras and newly purchased batteries from the same batch.

The test below was performed in March 2015, at night, at temperatures ranging from -15°C (5°F) to -25°C (-13°F). Two Nikon D800 cameras with fully charged batteries were set up on tripods. All cameras were set to F2.8, 3 second exposure, 24mm. Using the interval timer, a picture was taken every 10 seconds. The battery charge on each camera was measured every 10 minutes. One camera had no protection, one camera was fitted with a Camera Parka.

1. Complete protection from frost
Frost developed within the first half hour on the camera without a cover. No frost was observed on the camera fitted with the Camera Parka. Of note, the protected camera was also used after the 3 hour test for another 3 hours, without any frost developing.

2. Improved battery life and protection from wind
The graph below shows the Battery Charge Test results. Results are expressed in percentage of battery charge left for readings taken every 10 minutes. 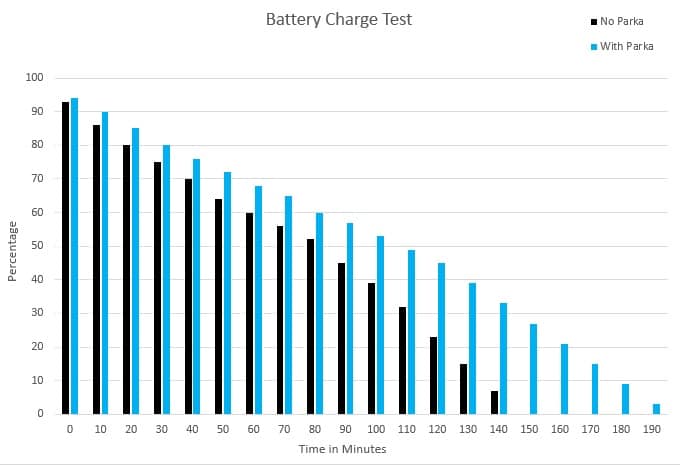 There was an initial effect on battery charge when taking the cameras out and setting up for the test, so the first battery charge readings at 0 min are not 100%. The camera fitted with the Camera Parka was taken out and set up first, then the camera without protection to minimize effects from cold before starting the test.

Without protection, the battery lasted for 2h20. The decrease in battery life was not linear and quickly dropped when the charge reached 50%. The variations can be attributed to external factors such as a very light wind and colder temperatures. When a light wind picked up an hour into the test, the temperature dropped from -15°C (5°F) to -21°C (-6°F). At 2 hours, the temperature was -25°C (-13°F).

This test was performed on a very cold night while shooting Northern lights standing in the middle of a frozen lake. Two Nikon D800 cameras were used, one with and one without a Camera Parka. Temperature was -38°C (-36.4°F) with wind chill; -28°C (-18.4°F) without wind chill.

Camera without a Camera Parka

Frost developed rapidly on the camera. The fully charged battery died after 1h15. We could hear the shutter becoming noisier and slowing down. We replaced the battery and took 2 more pictures before stopping the test to avoid damaging the camera. The camera was covered and packed for the night.

Camera with a Camera Parka

No frost developed on the camera. Checking the battery charge after 1h15 for comparison with the camera without a cover, the battery was still 30 % charged. There was no issue with the shutter. The battery was replaced after 1h50, and an hour later the photographers packed up because they were too cold. There was no sign of the shutter slowing down and no frost after a total of 3 hours.

For the tests, we setup 3 cameras. All three cameras are Nikon D800 with 3 batteries from the same batch number. The cameras were configured for 24mm, F2.8 and shutter speed of 3 seconds. The three camera configurations were

Fitting the Parka
To download the PDF version, click here Set your camera on a tripod, and leave the lens cap on. The Camera Parka is fitted from the back opening (the flap) and over the lens first. Open the Velcro strap and the flap at the back of the cover. The camera strap (if there is one), can be folded on the lens and nested in the front sleeve, or pulled trough one of the side sleeves. Slide the lens through the opening, and bring the cover over the sides of your camera, one side at a time. Fit the cover around the tripod head or plate. Secure the cover with the Velcro strap and adjust around your LCD screen. Magnets in the flap are to secure the flap. The contact points for these magnets are indicated by the silver dots on the image below. When flipped up, the flap will stay open thanks to the earth magnets. The magnets are also used to keep the flap closed when access to the LCD screen is not needed. Tighten the cover around the lens (note: if Manual focus is used, focus your camera first). In sub-zero temperatures, and when access to camera settings are not needed, close the side sleeves with the pull strings. The 2 side sleeves can be tighten together using the snap hook cord lock when it is windy for instance. Some good examples are when shooting a timelapse or when waiting. Install the remote release cable through a side sleeve or before fitting the Camera Parka on. ​ You are ready to go! For more info, visit https://atfrostedlens.com
FAQ

Does the Camera Parka protect from rain?
The Camera Parka is made using a water repellent fabric and offers the best protection in drizzle, fog or mist. It can offer some protection in light rain, however seams are not sealed and opening the flap exposes the back of cameras.

How do I pack my camera when I am done?
We leave the cover on, close it tight and pack it in the camera bag. Don’t forget to remove memory cards and batteries first. We do not place the camera with the cover in a plastic bag. Once we have brought the camera bag inside, we leave it for a few hours to slowly warm up.

Why is hand washing recommended on the label?
There are earth magnets in the flap of the Camera Parka. They will stick to your washer drum and your Camera Parka can be torn apart. The magnets can also break when tumbled.

Can I use the Camera Parka and carry my camera around my neck?
No. The Camera Parka is designed for use with a tripod. There are no openings for camera straps. This choice was made to minimize the number of openings and therefore exposure of the camera to outside elements as much as possible.

Why is the Remote Shutter Release cover so hard to put on?
It is meant to be a snug fit. The trick is to use a safety pin, and some patience. Here is a link to step-by-step instructions: https://atfrostedlens.com/remote-shutter-cover/

Are magnets used in the cover safe for my camera and memory cards?
Absolutely. Earth magnets (neodymium magnets) are safe to use and won’t damage cameras, SD or CF memory cards, laptops, smartphones or tablets. In fact, most electronic devices contain stronger magnets than the ones used in the flap, for instance hard-drives contain a magnet to spin the head. So why the concerns? Because older technologies based on magnetic fields were susceptible to magnets (floppy disks, VHS…).

Have you used the Camera Parka in extreme cold conditions?
Yes, we have used the Camera Parka Classic when photographing northern lights in Yellowknife at - 45°C (- 49°F) with a light wind in winter 2015-2016. We (human photographers) didn’t last outside too long… We set up the intervalometers on our cameras for timelapses, and sat in the car for 2 hours watching the northern lights and waiting for the camera batteries to die before going home.